Disclaimer: I will make reference to some things in this report they could very well be deemed inappropriate to bratwurst and pool balls. Also, if you don't like poo poo references then stop reading now.

Here we are, 2013 Chattanooga Mtn Stage Races. Hands down my favorite race. Christy Scott, Kathy Youngren and myself drove to Lookout Mtn GA on thursday evening and enjoyed 5 star dining from Rafael's Italian restaurant. I enjoyed a healthy portion of pepperoni pizza, cheese sticks, french fries, and queso dip with chips. Believe it or not I was real good on the way up. I did not soil Christy's new suburban once. 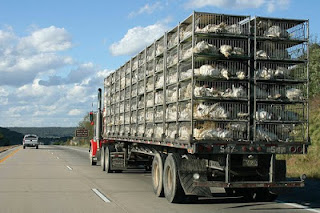 Lets quickly talk about Kathy. Kathy is a vegetarian and has such a huge heart for animals. On the previous day we talked about chicken trucks and how bad of a life those chickens have. I thought, "Man, I haven't seen a chicken truck in a long time. Well, on the way to Day 1 which is Raccoon Mtn, I see Kathy turn her head as in to avoid looking at something. I looked up and it was one of those chicken concentration camps on wheels. I hollered out, "Oh NO! One of their heads is caught in the cage!" Kathy was not happy with me.

Now to lay out a couple of characters. To protect me from a savage beating, I will not disclose the true identity of one of them. First we have Becky Boobie Bottles. So Becky borrows a running vest that has two bottles that sit on front of the chest. Now for the average flat male this would not cause a spectacle or excessive mammry movement. Unfortunately for Becky Boobie Bottles, they sit right on the end of the Thompson Twins. Needless to say, Becky had a following that day. The other character is Bumble Bee. I am not disclosing anything about her identity for fear of internal bleeding.

The race begins...I am in a group with Kris Worton, Kathy and Christy. Kathy leaves us and eventually it's just me a Christy. For some reason this course did not seem as bad this year. We were running very consistent and what I considered somewhat fast. However, I was feeling good. Shortly after the 2nd aid station Christy begins to back off so I push on. At this point Bumble Bee and myself are switching positions. She takes me on the climbs and I pass her on the downhills. All of a sudden Rafael's began to cause a gastric disturbance within my loins. So I get maybe 20-30 feet in front of Bumble Bee and crop dust a little. Man what a relief. We pass the last aid station and I press as hard as I can. In the last 2-3 miles I began to pass many people who had passed me earlier. We enter the road to the finish and I gun it, through the finish line....2:47, 13 minutes faster than the previous year. I quickly migrate to the ice bath and my buddy David Riddle (who broke the course record) comes by to chat. As David leaves Bumble Bee comes up to me and says, "Did ya'll smell that out there? It smelled like somebody was farting on the trails"....I about lost it. I proudly confessed that it was me. 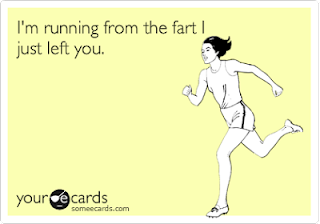 Day 2...The previous night I had 2 veggie burgers, and oreo double stuff cookies. On the way to Lookout I begin to have severe stomach pains...so bad that I fear a breaching of the cheeks. We get to Lula Lake and the porta-pottie line is long. I scurry to the nearest bush and as my booty breaches the air I gave natural birth to a healthy Pygmie.

The race starts...I run faster than the previous year in order to get the the rope climb so as not to be standing around at the bottleneck. Up to the summit with amazing views. As we descend the Mtn we cross the river back to the start around 4.5 miles, and traverse towards Covenant College. I actually had forgotten how beautiful this section is. There are some wonderful single track with a lot of greenery along little streams. I make it to the powerline section for the loop which takes us to backtrack to Lula lake. The previous year I completed day 2 in 3:36. I figured I would finish this day around 3:25. 3:20 rolls around and there is no sign of dropping back down to Lula Lake. I begin to worry because I knew I was running strong. I finally reach the start finish area to take the bridge and backtrack the initial 4.5 miles. I began to be discouraged because I fully expected to PR day 2. Down the rope, divert to the single track and to the finish....3:38... 2 minutes over.

Day 3 begins on Signal Mtn. Still discouraged from the previous day, and knowing the hard course ahead, I figure I will just get through it. However, once they said go, I quickly had a change of heart. I wanted to crush day 3 like I did day 1. You know that sound? That sound when a runner's toe catches a root? about a mile or two in I hear it and turn around to see a dude face plant and should roll. Mushroom rock, down to Suck Creek and back we push. After some ridge running we drop down to the technical trails. These trails are extremely rhythm busting...in essence run a few steps, climb a few step, etc...However, I am feeling great. I finally make it to the dreaded steps from "Helens House" to the overlook. I am completely gassed out as I walk up the paved road to the old folks home where I holler, "Can I get a whoop-whoop". A few of them gave me a holla, I think one cheesed himself and the other mooned me. I was delirious...that may or may not have actually happened. Down the chirt path to what I called the stale area. There is this winding trail that follows a slow stream and just layers on top of itself. I was relegated to walking much of this until a group of 3 guys caught me. As the passed I was determined to stay with them. We make the climb out to the final aid station, to which we are told that the finish is 3.6 miles away. 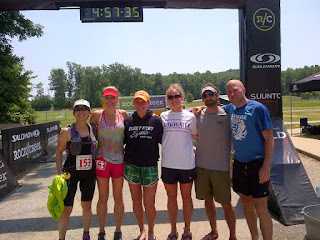 As I turn, I see Kris come up to the station all smiling and happy. So I ran harder that I did on any part of the course. I ran at least a 7:15 pace on the jeep roads until the climbs. I began to pass the group that I was with. A couple of miles out I see Becky Boobie Bottles husband...he turns to pace me in. I drop the hammer. All of a sudden with about a mile to go a freaking snake runs right at me. I climb the air ladder as it goes right under my feet. I continue pushing and see a guy in the distance...As I get close he hears me and just turns to the side and lets me pass. I knew I was going to crush my time. I break out of the woods through the finish and turn around to see 4:14...1 minute slower than the previous year. WHAT THE CRAP! I can only imagine I pushed too hard on day 1.

Christy beat me bad on day 3, David sets the course record each day and Kathy takes 3rd overall female, while I whine and Becky pukes.

So I'm walking to the car when I see Bumble Bee and her husband. She has a towel wrapped around her waist while she is changing shorts. Her husband is on the back of the SUV or truck with one of those towels that have velcro and wrap around your waist. I actually thought it was a kilt at first. So we are talking and all of a sudden I saw his bratwurst and hairy new potatoes peeking at me under his towel kilt. I tried not to act like I saw anything. So Barney bratwurst comes out a couple more times for air when I say goodbye and walk away. For some reason I turn back wondering if I was having a heat stroke and just imagined that... As I turned BB's husband lifted his left leg and it looked like a red pool ball fell out. Believe it or not, the night before, David Riddle told me a story about running back in Huntsville and a man came running toward him with his mountain oyster hanging out the panty liner. I know David's not gonna believe this....

Gotta give a shout out to Michael Scott and Daniel Lucas. These Tennessee guys befriended an average ultra-runner and make him feel like a superstar. I wanted a Salomon Hydration waist belt and Michael delivered. To Rob Youngren and David Riddle...there is nothing like seeing you guys at the finish line asking me if I need anything. To Christy, Kathy and Rebecca...I cannot tell you how much fun I had with you guys. Thank you Stephen and Tony for slapping me on the butt. Luke and Brandi...can I borrow 20 bucks?

Lastly, too my wife and son....Your letter was the best Father's Day present ever! Thank you Jesus for amazing family and friends. 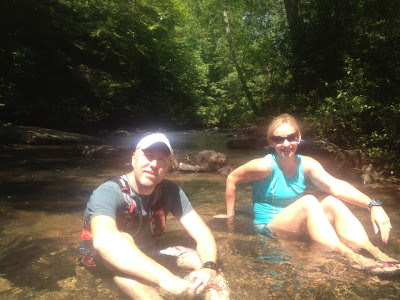 Posted by HotWingRunner at 7:11 PM