You should be able to figure out how my Mountain Mist 50K race went by the look on my face above.
This will be short and only have one funny thing at the end.

The night before, I had Bill Warner, Yong Kim and Nathan Custer sleeping at my house. Yong wet the bed, discovered Nathan was a chic once, and Bill's new nipple piercings bleed on our guest sheets. I probably shouldn't have told you that, but they all live in TN.

We reach the mountain and it is covered in snow. James Falcon is going to pace me to a Mtn Mist PR of 5:40. James, Benj, Dave, Nathan, Darcy and myself set out together. Darcy is wearing these painted on shorts, and I promise...there was a group of men right "behind" her. Benj had on his Salomon junk revealers and they were saggin in the air biscuit release valve. I had on my RC shorty shorts and well Dave was wearing what the average Hobbit wears. 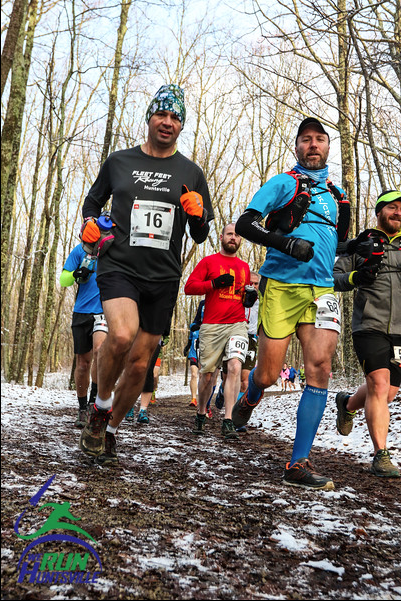 The course is muddy pretty much from the initial decent on. James keeps us on a 5:40 finish time pace. We reached Aid station 1 at 1:02, right on pace, and crush down Warpath. We expected Powerline to be like doo-doo mud, but it was more like diarhea, slick and brown, but very runnable. Up K2 we power hiked. Managed the rolling of Goat trail to Aid 2. In and out, on our way around Panther Knob.

Since Lookout 50, my weekly mileage had been lacking. I figured, my athleticism and uncanny good looks should be enough to carry me through this race. I reach the Red Gate, mile 17 feeling good, and embark on the real start of the race (the last 14). By 17 Benj and Darcy had left us and Dave had dropped back.

We flew over the rocks of Toll Gate, and hammered the rolling rivers of High Trail. I knew that if I could hammer Bluff Line, I was in store for a great race. I get to Bluff Line and James and I blow through it. At the bottom I felt like I had exerted a little too much. Coming to Railroad Bed Aid station I was feeling tired but knew I had to press through the Orthodontist appointment maker called Railroad Bed. We left Nathan and Donnie Holmes in the dust and on to Alms House. Alms was fairly dry to my surprise so the flat rocks were not an issue.

We get to Waterline, and I am grateful to have an excuse to walk. Up to this point I had been sucking down Skratch the whole way, along with my E-Gels. So fruity flavors were starting to get to me. Every year I cramp at the top of Waterline, so I was hoping the Skratch would make the difference. Waterline sucked! However, I never got a cramp. So the Skratch worked. We reached the Aid Station at Burrit and I could barely talk. Megan got me some water and all I could do was nod at James' wife. I wanted to puke SO BAD. James handed me a potato covered in salt.

We set out for Arrowhead, the trail I hate the most. A Rolling rocky suckfest from the pits of hell.  My battery was dead. People began to pass me, 5,6, 10, I lost count. I was able to hop down the mudpits of Natural Well fairly good. We sat in the pool at the bottom which seemed to breathe some life into me.

Through slush mile I am barely trucking. I am so sick of anything with sugar in it that I cannot drink out of my bottles. Every sip would make me gag and almost puke. James handed me his water and we began up Rest Shelter. I literally almost passed out several times. I would close my eyes and see my world spinning.

I wanted to lie down at Kathy's bench but James wouldn't let me. I wanted a boulder to fall on me so I could get a med-flight out. 2.5 miles to go and I wanted to quit. We reach the top and I down some water and crackers. WHOA! thats what I was missing. I needed real food in my body. We began a run walk routine. At points I was able to get a decent pace going. James was gracious enough to give me some walk breaks. Through the finish line...Better than last year, but not a PR. I was so disappointed. I had already planned on bailing out of Cheaha in February.

It seemed like all my friends had great races except for me. I was happy for them but I felt embarrassed by my performance. I soon took comfort in knowing Jerry Abbott sucked even worse. No offense Jerry.

Now the funny part of the race: So I bought one of those cool towels that you can wrap around yourself and get naked an no one see your giblets. Pulled the shorts off, and didn't think I needed any underwear, and slipped on my pants. So the runway wasn't clear. I closed the barn door on the chicken head. I screamed while the doberman was latched onto the Boloney Pony. Carefully, pulled down the zipper revealing that I had not been visited by the spirit of Lorena Bobbit.

Thank you Lord for helping. Thank you Rock/Creek for letting me on your team. Thank you HTC for having great races. Thank you Janice for fixing my boo-boo.

I love you guys 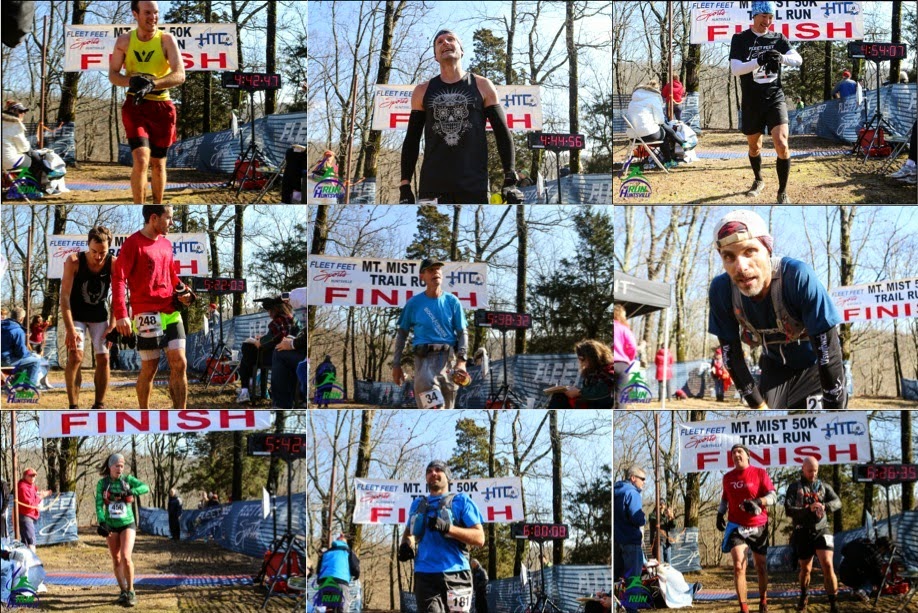 Posted by HotWingRunner at 1:55 PM