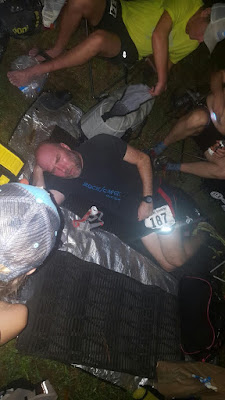 The Yeti 50K left me in pain, emotional and full of questions. I left there completely drained physically, emotionally and intestionally. This was my first trail ultra since being admitted to the hospital back in February. According to the website the course is fast and perfect for a first timer. Pfff, I'm a veteran at this. Told friends I expect to finish around 6 hours. I was wrong. WARNING: This report is full of farts so be aware.

We get to the campsite around 3pm and within 5 minutes my man titties were dripping like Kate plus 8. We sat out in the heat before the race so long my coin purse reached full stretching capacity and was hanging out both sides of my shorts. Thankfully I had my Boudraux's Butt Paste with me. I grease up and Rick Rawls, David Nast and Ryan Harbaugh head to the start line. What I love most about races is seeing the people you have become friends with through other races. As soon as I got there I could smell the Birmingham people right away (old spice, Schlitz beer and aqua net hair spray). Next came in the Nashville people then the Oxford crew. Martin Schneeklot rolls in just before the start. Heard he was at a Sausage festival. Megan, Emily, Lindsey, Scott, Allie and Liz and their crews topped off the party.

We line up for the start, tuck in my new potatos pocket and we are off. I don't sell out my friends but certain guy I was running with started fartin within the first mile then had the nerve to chastise me when I joined. So anyway, Before we even complete the first loop, Fartin Martin and myself are contemplating quitting. Granted he did ride a 100 miler that morning, I had no excuse. It was so hot and I had determined my race depended on him starting the second loop. It got dark sometime after the river crossing which consisted of some great volunteers and a tranny (dude in a wig trying to look like Kenny R). and I actually felt some fear....meaning I didn't want to be out there by myself in the dark. We enter the start finish area and I ask him, "What are we gonna do?"

David Nast and I begin to walk, allowing Martin to go get his pack and catch us. If you only had a hand bottle, you were suffering.  Martin emptied his bottle half way through the first loop. By the start of the second loop I had already sucked down 50 ounces of Tailwind, and I promise you Tailwind produces the nastiest tailwind I have ever seasoned the atmosphere with. At first it was just all hot air biscuits, but later turning to the most sinister stench. David didn't know it but I was already quitting in my mind. I tried to draw inspiration by thinking of my wife and son. I envisioned my offspring telling to start the third loop, but he wasn't convincing me. I thought about this report and my excuses for not finishing. Like I stated earlier, this race left me with many questions...Was it the extra 18lbs? Was it too hot? Was I undertrained? This is why I don't like loops, because they are easier to quit.

Martin catches us at the river crossing, along with Allie. Imagine this cute lil punk 1st time 50K'er catching a veteran like myself and being happy about it. She don't know it but she almost got pistol whipped. Next I hear Martin screaming "Where's my water bottle!" He thought it had floated out of his vest. He hollers at the tranny and other volunteers. They respond, then he asks them if they are drunk or did they really see it. I thought it was about to turn ugly, but it turns out he knew them. After the race and all the screaming and F-bombs, Martin discovers his bottle still in his pack. We push on and slowly Martin and David slip away. Yep, I'm done. I'm quitting. Running sux.

I slow roll to the start/finish area and tell Jason I'm done. I had convinced myself that it was physical and not mental. I physically could not continue. Jason told me to take some time then just walk it if I had too. So I'm at the aid station, Ryan Harbaugh, Megan Nobriga, Scott Perry, Lindsey Hardest, and Emily Kennedy pull in. Every Huntsville runner is pushing on and here I am quitting. So what did I do? I farted at the aid station and cleared it out. The are was stale and there was no wind movement, so it could be felt for a 20' radius. I didn't care, I was done. Jason kept pushing me to give it some time. The dude Allie's currently smooching comes over with a roller and and Red Bull. I down the Red Bull and walk to the chair to change my batteries in the headlamp in case I decided to go out. Jamie Henderson gives me a message from Martin, something like..."Martin said he loves you and you are his inspiration and that you should continue." It didn't sound like Martin but I thought maybe...Spencer (the Allie smoother) hands me another Red Bull and I see Lindsey and Ryan standing there. I asked if they were waiting on me, hoping they would say no. They said yes.

How could I not at least start the 3rd loop. I have watched these two runners develop into ultra-runners and here they were "mentoring" me. For the record, Ryan was topless and in spandex. We set out for the 3rd loop and I feel the Red Bull kicking in. I don't know what Lindsey was snorting but she takes off and leaves us. Eventually Ryan and I are being followed by the blonde chic from the area. I politely turn and apologize for what I was about to do. Then I let it rip. She was about 15 feet back when it wrapped around her face. Her only reply was "YEP!" I just gassed this innocent woman and didn't care. I told her my name was Brandon Mader.

From that point forward my goal was to catch Lindsey, Megan and Emily. I did all three. Ran with Megan and Emily for a while and as I would start to pass Megan, she would start running...We have somewhat of a little rivalry going on. I really wanted to beat her and Emily. Finally I started running before the power line cut and broke her. Crossing the river they were about 50' behind and I didn't stop for water, hoping to put a lead on her. By the time I reached the staircase, I was looking for a place to drop a steamy. There was no where to go. I make it to the top and the trail splits. I go right to relieve myself. Hunching over while trying not to fall off a cliff is harder than you think. It took every bit of energy I had. I could see Megan and Emily and they crested the top and went left. I had lost all my drive to catch them. I reach the 2 mile out mark where the Park Rangers had been all night and politely asked for water. They told me they had a little of their personal water. I didn't realize that until he was pouring it in. It was coooolllllllld water. I told him, "God bless you sir...", and then I started to ugly cry. My face contorted but no tears came out. I was dehydrated.

Lindsey passes me and then Ryan. Ryan and I decide to walk it in. Out of the woods we come to the finish. I was officially the last place Huntsville runner (which Megan was quick to confirm) and was ok with it.

So the title says, "Yeti Farts and the Big Girl". Sometime during the second loop we passed a big lady walking the course. When I characterize her as a big girl, I do not mean any disrespect, nor am I making fun of her. We realized she was a part of the race. Remember this race started at 7pm, so this was late. I assumed she was running the 11 miler and just walking. During my 3rd loop, we pass her again. I realize she is doing the 50K. I don't know her name or if she even finished, however, she had an impact on me. I wish I had taken the time to ask her name. For now, I will call her "Inspiration". So as I passed Inspiration the second time I ripped one on her and she passed out for about 27 seconds. 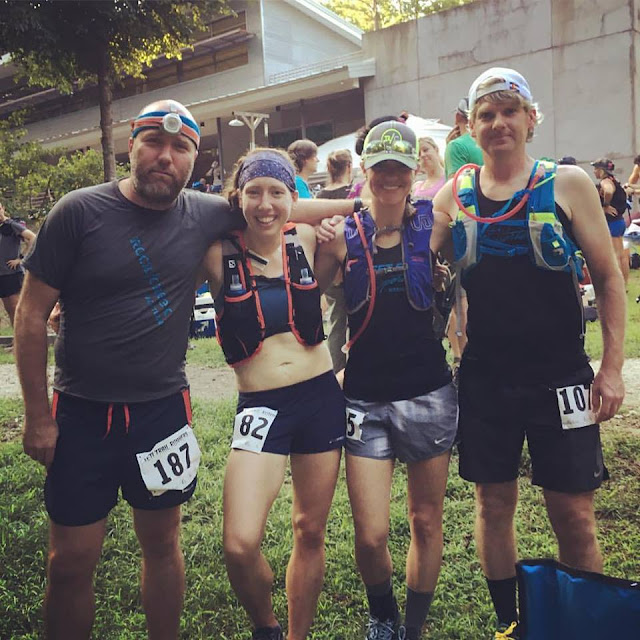 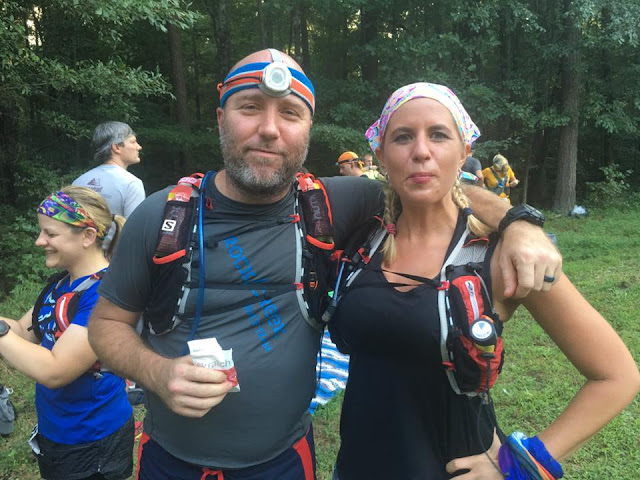 Posted by HotWingRunner at 6:08 PM