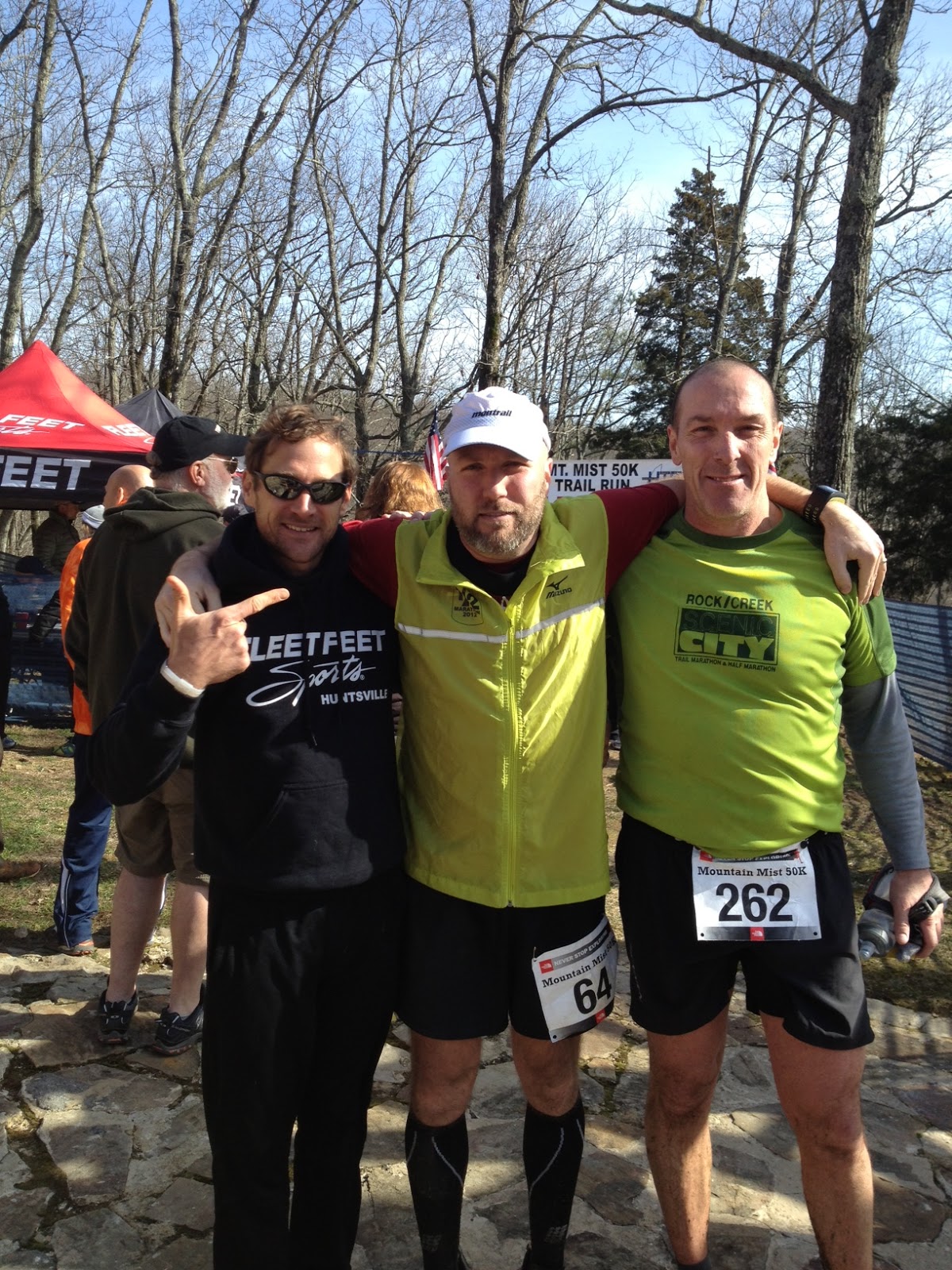 Huntsville's premier trail race Mountain Mist 50k proved to be a day of records, broken bones, busted sandals, mud soaked bodies, agony and defeat. So before we get into the race I need to make a couple of announcements...Will said I could not write anything that would make him cry or he would quit reading my blogs...And I want to say thank you Lord. I prayed for a great race and got it.

Approximately 350'ish runners began to line up for the race. Not me of course...I'm sure you can guess where I was. Anyway, from my stall I could hear Suzanne Taylor calling everyone to line up. So I perform a couple of ordinarily illegal moves and head outside to the start. I see Blake on the microphone thinkin..."Is he about to sing our something..." then I see Sarah Tei freakin out doing cartwheels and back flips. Then I realized what just happened...The doctor saved one of Blake's toenails....Ah just kiddin. That honker proposed and she said yes.
My friggin watch won't sync and then the gun fires. I begin trying to run conservative however I know if I am too conservative that I will get caught in a train on Cold Springs. Jason Shattuck is behind me checking out my behind along with a mustache lady. Right off the bat I find myself behind Kris Whorton and Michael Scott and I think "Oh crap...I'm too fast." Then we hit Mtn Mist and I catch Christy and Dana, "Oh Shark...I am too fast." I'm not gonna say which one but my Stud Glasses kept fogging up and I think one of them had poot porridge the night before. I'm just sayin. We pass the first aid station and begin our decent on Warpath. I go right and Christy and Dana goes left...bam, I'm in front now. I DID NOT want to be in front of them. In a split second I almost stopped and let them pass. I chose to rush Warpath and take advantage of the downhill. For the first time in my life this would be the last I would see of them in a race. I hit powerline and every step was like running with cow patty's molded to your feet. It makes you run like a midget in a sprint (no offense to my midget friends...if I was to have any).

I weave through Goat trail and come to 3-benches. There is nothing like coming to an aid station and having people call your name. According to the time I realize that I am fast and think I may hit the 17 mile aid station around 2:45, however I am feeling great so I keep pushing. Around Logan, Keith, through Stone Cuts and down Sinks to Mtn Mist again. This blonde chic was hot on my tail through Cold Springs. I beat her to mile 17 aid station with a time of 2:50. Papa Tony Alexander and Dougie Doug greeted me as I began my last 14 miles. I take off ahead of the chic and not recognizing her from around here I anticipated Toll Gate slowing her down...and it did. Surprisingly I caught up to veteran ultra-runner Wayne Heckler and was behind him on High Trail. By this time my pace began to take a toll on me. I felt myself slowing even on Bluffline which I normally crush. I still manage to stay hot on Wayne's tail and grind through Bluffline. At the Railroad aid station an Angel (Robin Giles) sent from the Lord himself had a bottle of Hallelujah Dew. Jim Giles told me that I was in about 57-58th place. WHAT THE FRUITCAKE? This pumps me up. I take off and know that I can crush Railroad. I actually pass Wayne and then it happened...No, no, not what your thinking...There was Pippie Longstocking II. 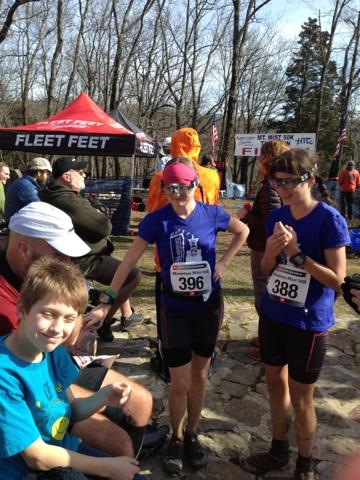 For those of you who don't know the Pippie's...Mary and Star are two 16-18 year old ultra-runners. These girls beat me every friggin time. I catch them on races, pass them but they always end up beating me overall. Today is my day! I pass #2 on a creek section and 'accidentally' push her into the creek. Well, I thought about it anyway. I pass her and am on fire. I am ahead of her, blonde chic, and Wayne. We merge to Alms house and Wayne and Blonde chic passes me...BUT WAIT!!!!...is it possible? I caught Pippie #1 and passed her. Kinda sad I'm excited about passing 2 teenage girls, but don't judge me, these aren't ordinary girls. I hit Waterline and begin the suckfest. My night visions of running Waterline in runderwear and paisties was only a fantasy. Waterline sucks at mile 22. I keep looking back anticipating Pippie I & II, Dana, and Christie. Well whadya know. Pippie I catches and passes me at the top of Waterline and frolics right past me. All of a sudden my calves started fluttering and twitching. I was cramping all the way up to my mangeena. I had been taking salt every hour however the cramps were severe. We reach the 24 mile aid station and she takes off before me as Pippie 2 comes in. Running these trails every weekend you learn how to run on the technical stuff. So I am in front of Pippie I and Pippie II is somewhere ahead. We hit the flat section of Nat Well and I see something I should not. It's Pippie II with Tim Pitt. He explained he had been walking since Alms House. I have dreamed of this day since McKay Hollow 2010. However, on my best day I could never beat him unless he had his worst day. Well...that very thing happened. You know some days I wanna choke him however I know he wants to see me succeed. He cheered me on and I pressed harder. Again, knowing the trails I was able to burn rubber down Nat Well and catch the blonde chic. Climbing Cry Baby hill I simply walk. I hit McKay hollow trying to distance myself the best I could however my manstrual cramps set in and coupled with slush mile it was all I could do to stay around a 12 minute pace. I reach the climb out to rest shelter and walk. You can freakin fantasize all day long about running Rest shelter...then reality sets in. I look back and there is the blonde chic, and the Pippies. 3/4's of the way up the Pippies pass me. Evidently they remembered me from the Chattanooga races and both thanked me for alway encouraging them and asking if they are Ok. That made my day. It sorta eased the pain of them passing me. We hit the top of Rest Shelter and Ed Blalack is there. I drink some water and start walking to the finish. Ed screams at me "Get to freakin running puddin tang", or something like that. So I run. At various sections I want to walk but I keep pushing. I look up and I see someone hit the ground. It's Brett Addington. NO WAY! I'm ahead of Dana, Christy, Fritz, Tim, Larry Lucas, Caitlin, Randy and now about to pass Brett. This is surreal. I never beat these people. I cross the finish line at 5:49:58. I can be happy with my time however, I cannot gloat about finishing before the people I listed. You see Mtn Mist is one of those races that can take down the best racers. I learned that this day you either had your best day or your worse. Mtn Mist was is no respecter of persons. If you go too hard the first 17...you may pay for it on the back 14.


It wasn't until I finished that I found out my buddy Patti Holmes fell on Alms House and broke her collar bone. I spent much of the race looking for her because just a couple weeks ago she spanked me at Recover from the Holidays.

The highlight of my day was the finish. The Pippies came over to me and gave me a big hug and thanked me again. I made some new buddies.


Posted by HotWingRunner at 5:31 PM