Normally when you run a race the first time its real hard and the second time not so much. This is not the case for Savage Gulf Marathon. First off, Randy Whorton said I could be on the Rock Creek race team if I win the Chattanooga Stage Races this year. So there is a chance...

Usually my race report consists of a lead character such as Pig Tail Penny, Pippie Longstocking, Lady changing her oil, or a midget sprinter. This report the lead character's are Blonde Betty and the Dirt Napper. Before I get into their story and the race let me lead up to it...

Friggin Will Barnwell jinxed me. I had approximately a 1 year shart free streak until the day before the race. Will sends an email to everyone that there will be no stops on the way to Savage Gulf unless "Cary" sharts himself. Whadya friggin know...before the trip I try a tricky maneuver called the crop dust and end up spraying cellulose in my tighty whitey's. Thanks Will...I hope you get a hemorrhoid.

Anyway, we get set-up, get the sweet potato's on the fire and do what all grown men do while sittin around a campfire...talk about things we should not and see who can fart the loudest. I believe Marc Davis won however Will's had the best dynamic range. Some homeless dude (Alan Jaques) comes walking through the woods all hungry and crap and helps himself to some sweet potato's.

I could not sleep. It was a long hard night for me. I was cold and missing Janice. I promise Will, Marc, and Tim if you friggin tell anyone what I told you I will beat the crap out of you...My family reads these blogs! What I tell you at Savage Gulf Stays at Savage Gulf.

Anyway, as we are prepping for the race Blonde Betty comes walking over to us and straight to me... she says "Can you help me with my pack, I'm a complete retard"...To which I replied, "No your not, your only a little retarded." Very glad she laughed...Anyway I get her fixed up and all the guys are just looking at me...One of them says..."Blonde's never come up to me and ask me for help", to which the others concurred. So during the run I got to thinking about what they said. You know pondering why men and women seem to be more comfortable around me...then it hit me. AH CRAP THEY PROBABLY THINK I'M GAY. And I'm not. You've seen my wife. She's smokin hot. I mean she'd still be hot even if she had some fingers missing or something.

The race starts...We run on top and after a couple of miles begin the descent down "Stone Door". Stone Door is like our Stone Cuts on Monte Sano except about 150' high. I will try to describe this race the best way possible. Stone Door, boulder hoping, wet mossy rocks, switch backs, more boulder hoping, people falling, then we get to the bottom and cross the first swinging bridge. There are several amazing creek and dry river bed crossings all through the gulf. On the way to mile 10 we come up on a beautiful waterfall and rock shelf. The waterfall produced and amazing cooling effect which greatly helped because it was already getting too hot for a trail run. 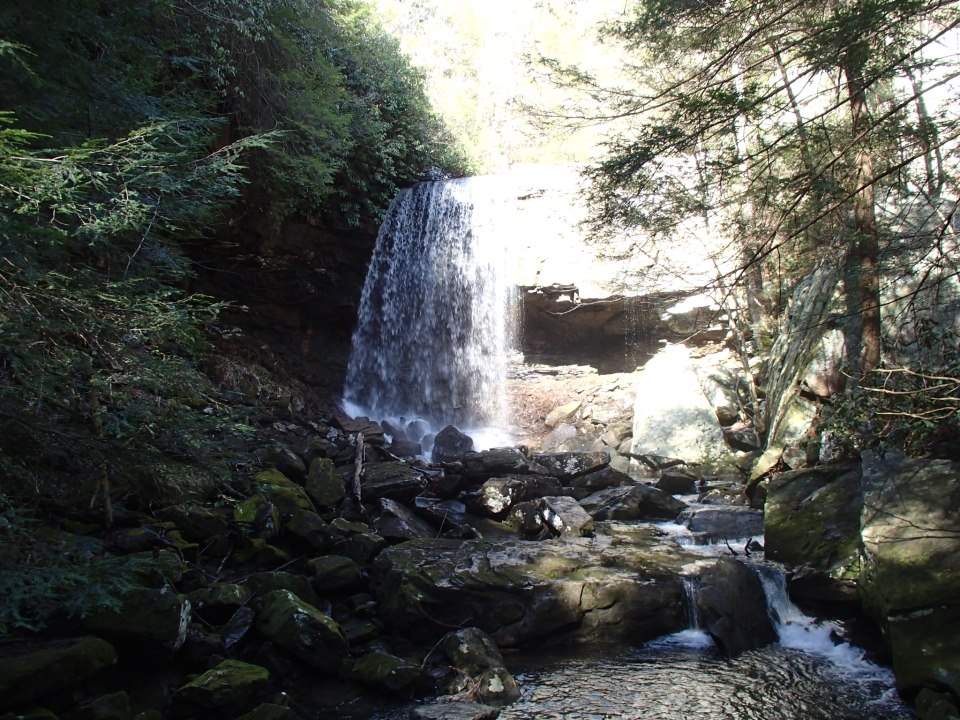 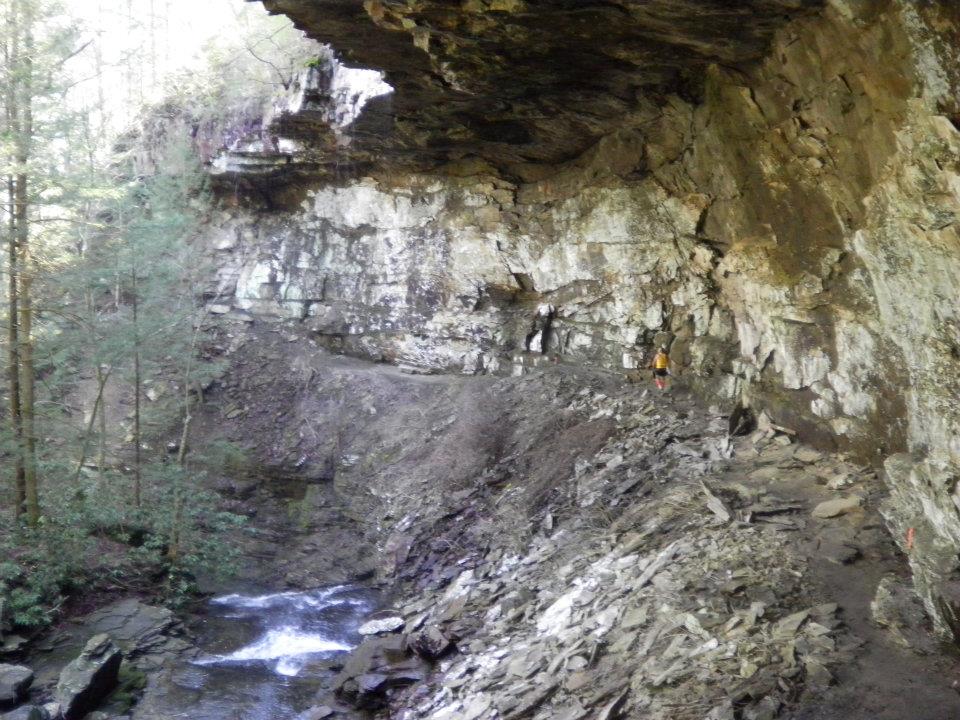 I promise, this is the most beautiful course I have ever run. Joe St. Lawrence and myself kept a steady pace and was able to catch approximately 6-8 people who started to fast. We hit the switch back climb which takes you to the second Aid Station. I completely forgot how hard this section was. As we ascended I slipped on some roots and Joe caught me before falling down the side of the switchback. As we entered the 13 mile aid station Toboggan Joe left me and I was own my own for most of the second Mtn ridge running. This section is one of the few runnable sections on the whole course. At the end of the ridge running you begin  the descent on a wet softball size boulder laden trail. It is what anyone who has run Mtn Mist would call the SOB ditch except is last forever. At the bottom in my opinion is where the race starts. From around mile 18-22 is an excruciating rolling, rocky trail, including the backtracking of the boulder field experienced around mile 5. It is SO HOT. Every creek crossing I dip my hat in the water to help cool my body. I am so ready for this race to be over, eagerly awaiting the final climb to which I know will be painful. As we are running the rolling rocky single track a couple of chics, are catching me. One of them hollers out with a cramp...I asked her if she had any salt to which she replied "no". So I thought, "What would Tim Pitt do in this situation?" I turned and said "Good luck with that" and took off...No, I gave her some S-Caps and that heifer, and I mean that in a good Christian way, took off and left me. We finally begin the ascent only to realize at the top we were going back down to the river. Then we finally begin the ascent, and of course end up going back down. I am so beat down that I am just walking. I have no watch and no clue what time it is or where I stand...FINALLY, the climb out. And yes, it was just as bad as last year. I make it to the top where I have a 2.9 mile South Plateau type trail to the finish. My goal was to knock off an hour from the previous years time. I wanted to come in around 6 hours but during the final ascent I felt like I would come in around 6:22....As I broke through the woods onto the road, up the drive to the finish, I crossed at 6:23...59 minutes faster than last year. 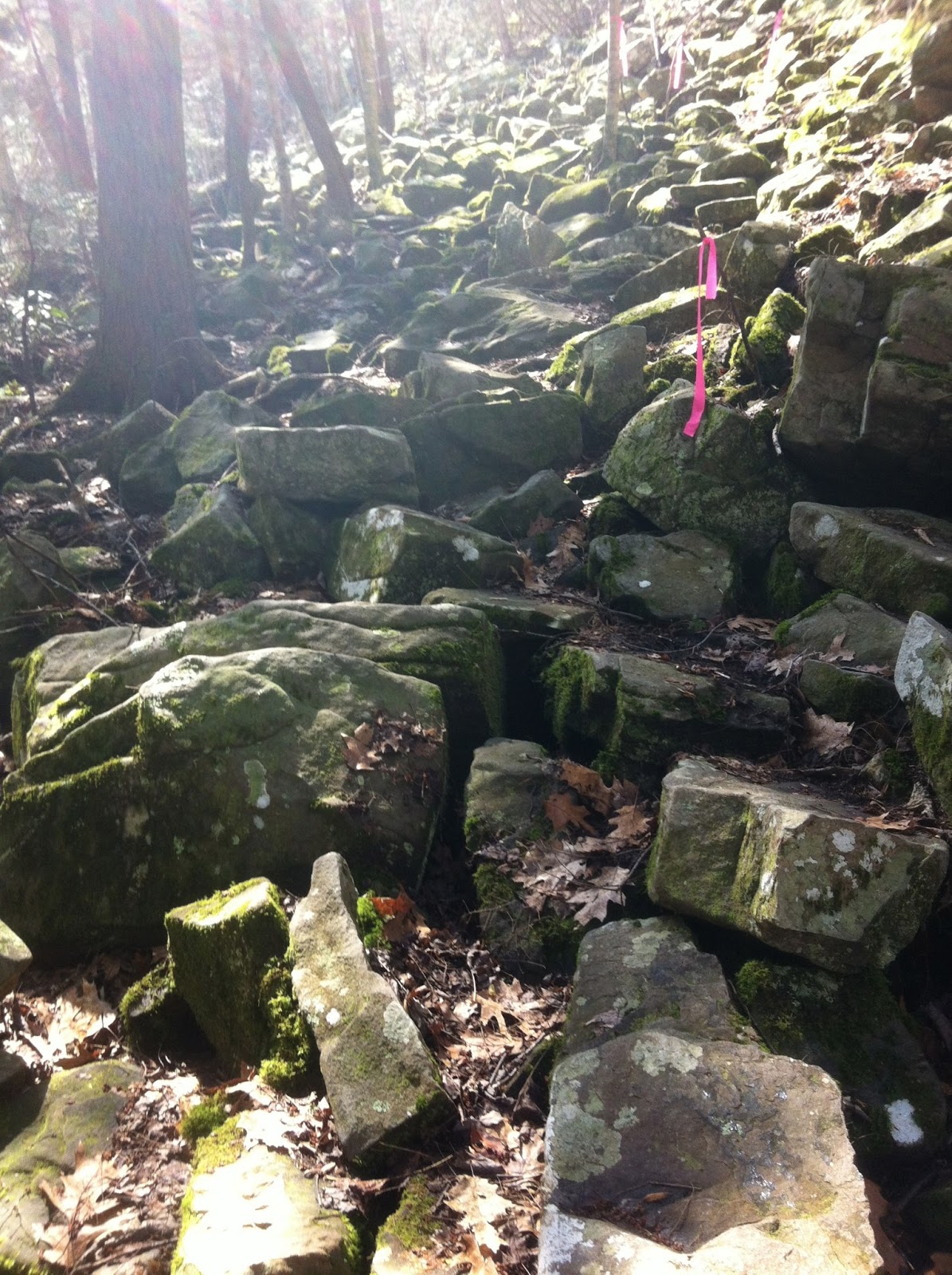 Now for the Dirt Napper. Benj Lance is a young ultra-runner and one of the nicest guys I know. I kept looking for Benj to come across the line...I figured he would be about 30 minutes or so behind me. Benj was nowhere to be found. We leave headed home not knowing where Benj was. On the way home we see the results get posted and Benj finished dead last. I was shocked because he is a great consistent runner. This is what he posted about his experience.

"So, embarrassed to make this status, but here it goes. Finished DEAD LAST today and in 9 hours. So many things went wrong it is comical. Got really sick, and so dizzy from the heat that I thought I was going to pass out and laid down next to the trail after the 3rd aid station. After many runners checking on me, I fell asleep until Melanie woke me and made me march a little down the trail, again the Dizzyness and inability to walk at all came so I curled up in the fetal position in the shade and gave up. Many minutes later the sweeper woke me up from a really deep sleep and I started walking with him. At the bottom of the last big climb a park ranger (ginger beard) informed me I couldn't finish, but I ignored him and hauled butt up the big climb, at the top I waited for the sweeper and we walked it in slowly... 9 hours for a freaking marathon... what is wrong with me. PS that course is beautiful, and the hardest marathon there is. My first DFL..."

MY FRIEND TOOK A DIRT NAP! Not once but twice, and still finished the race. Benj, a buttload of people would have quit and hitched a ride back. I salute you brother!

Oh yeah, Friggin Daniel Lucas was there and was topless.

Thanks for reading...And thank you Jesus for allowing me to come back home to Janice and Alex.

Posted by HotWingRunner at 3:06 PM