Upchuck 2013-Immodium and the White Wiper 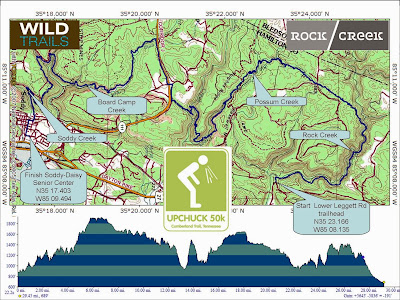 Do you see the map to the left? It does ZERO justice to what we actually went through on Saturday, November 9, 2013. I had feared signing up for the Upchuck 50K for three years. This year I felt I had the training and preparation to attempt this race. On the Rock Creek website it explicitly states that this SHOULD NOT be your first 50K attempt, and that it will probably be your slowest 50K. Well what the freak do they know. I am from Alabama. I once took 1st in my age group at a Turkey Day race with at least 3 in my age group.

Myself and four of my hairy brothers (Rob Youngren, Benj Lance, Jeff Deaton, and James Suh) commuted to Hixson, TN and speculated what the race would be like over Lupi's Pizza. We get to the finish line awaiting the ride to the start. It was so cold my nipples started to crystalize.

We finally boarded the prison bus and was greeted by the OU's (Original Upchucker's), which one was sporting a prison jumpsuit, afro and bubba teeth. By the look of the jumpsuit sucking in his crack, makes you wonder if he dropped the soap one to many times before breaking out. Anyway, I was getting real nervous because I had no brownie bites going down the dookie-chute. So some dude gave me what I can only hope was an Imodium. He said I was taking half a dose and should be able to resume normal squat posturing the next day. Well, you should never listen to the medical advice of an ultra-runner you don't know...just saying. I didn't poop for three days, and when I did...WHOA, I literally mangled the industrial toilet at work, and there was someone waiting to go in when I left.

So we get the the starting area and I am greeted by my bro Hot Daniel, (aka Daniel Lucas) and he had a friend standing with him who we will call Hot Kat. So we all line up for a group picture before the start. 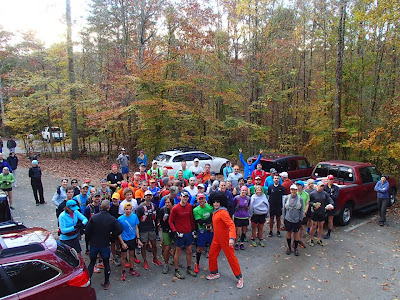 On your mark, get set, GO! We are off. Within the first 100 feet the lead runners were off course, and were coming back as we approached. The views were amazing, well, what you could actually see, because you feared for your teeth if you dared to look away. I am feeling great and have settled into a great rhythm. Pretty much the first 6 miles are uphill. However, it does not seem that hard. At some point, (I don't remember where) the trail becomes this beautiful pine straw laden Heaven.

Around mile 7 we hit the first aid station and I drink a little coke and continue pursuing the win.

Shortly after leaving the aid station something off to the side of the woods catches my eye. It's the White Wiper and he was assuming the airline crash position. Come to find out this covert crapper was Mr. Jeff Deaton himself (sorry to call you out like this dude...). We begin the remaining journey together. Beautiful trails, bridges and gorges. Jeff remembered that around mile 13 there was a climb on the chart akin to a space needle. We hiked steadfastly feeling great. Eventually, we come to the mile 18 aid station and are greeted by the Tennessee Sasquatch himself, Mr. Michael Scott. I cannot say enough great things about this guy. He laughs at me when I cry and gives great gifts. I love you man! I choke down some amazing choco-chip pumpkin squares, while the entire aid-station ladies incessantly flirted with me. Me, Jeff, and some blonde short-haired chic leave the aid station and run the interstate before entering a trail that runs along the road. This is where things started going downhill for me. I was feeling great until then. In fact, I was a little cocky thinking how well I was doing. Eventually the run to the gorge and back up to the top started again. The hills were like a cold sore on a hooker, they just kept coming back. We bottom out to a gorge where there is a "Future" bridge and another that looked like Atz Lee from "Alaska the Last Frontier" built with his "not as pretty as Eiven's wife" wife, which consisted of a couple of trees spanning the divide held together with some rubber bands. When you cross to the other side, trying to find the trail is like a fat man trying to find that one TP square that broke off in his crack...you gotta get your hands dirty climbing around. Finally found the trail. Jeff and the blonde chick left me at the road earlier and I was by myself for 99% of the remaining time.

The hills were not the issue for me. It seemed like the last 8 or so miles consisted of a single track covered in leaves. Well that doesn't sound too bad right? Add in a continuous rock garden with shifting flat rocks. Then add in the type of trail that you cannot get any rhythm on. Meaning you run 2 steps, walk up and repeat over and over. There were so many leaves that often times I would slip and barely catch myself. At one point I slipped and landed on the side of my face. I was happy to lay there for a moment and wonder "why do I do this?"

Eventually Dreamy Dreama catches me and gives me the good news that we have one more climb and that I could look off to the right and see the lake where we would end up. Dreama, I freakin did not want to see that stupid lake. Why? Because, the trail taking us there was going in the opposite direction. I was done! Jeff, was ahead of me, I had fallen, my feet were killing me...then there was the road...I ran around an 8:30 pace downhill, and that was as fast as I could go.

Touched the garbage can and I was done. This was the cool part, my bro Daniel and Joe St. Lawrence hung around long enough to see me come through to the finish. Michael Scott seemed to be enjoying the pain I was in. I was told to write my name and time down by myself. How cruel is that? I sat there for a second and tried to remember how to spell my name.

My impression of Upchuck. EPIC! Every 50ker should do this race. I equate much of the trail system to what I experienced at Savage Gulf.

BTW! Anyone reading this remember the Great "Shoe Debate of 2013" post?

Posted by HotWingRunner at 4:12 PM