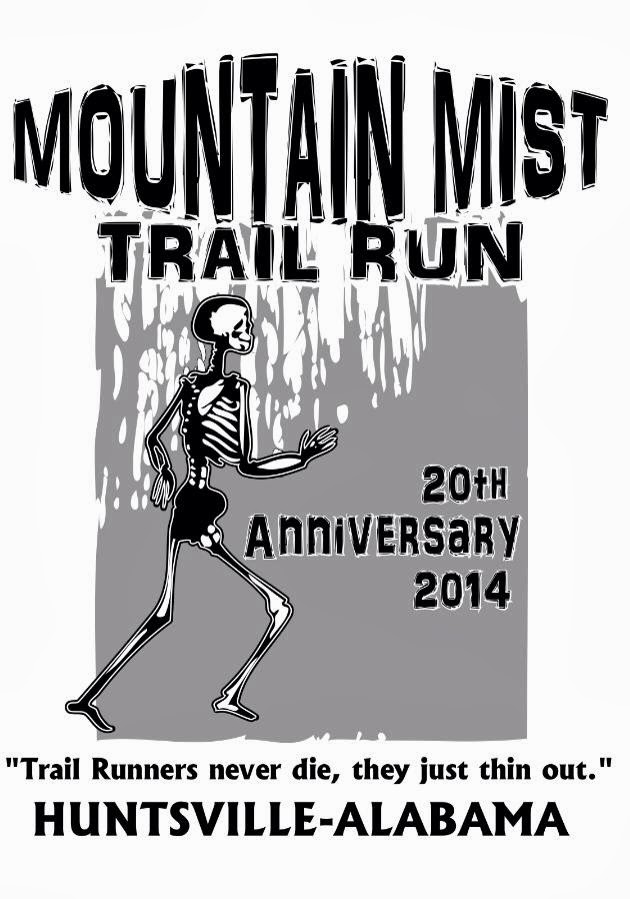 Mtn Mist 2014 was my year. I made radical improvements in my diet over the past 4 weeks; lost 5 lbs; good weekly miles; didn't eat hot-wings the night before. My goal was 5:30. And why not? I ran Dizzy Fifties in 5:22 and the previous year my times were only 10 minutes apart.

Ok, lets get something straight right of the bat. Some of ya'll think I pick on Christy and call her out a lot. Well......yeah it's true. But let me explain why. Christy is the baseline to which I strive for, except without having boobs. So yeah, my goal is to beat her (non-domestically) every race I can.

The race starts and it's Dana, Christy and myself on the opening drive. The trails are frozen so what was once mud grooves was now ankle snappers. I'm sporting runderwear, pro-combat compression shorts and run shorts with a panty-liner. Mr. Poppers went numb once so I wasn't taking any chances. 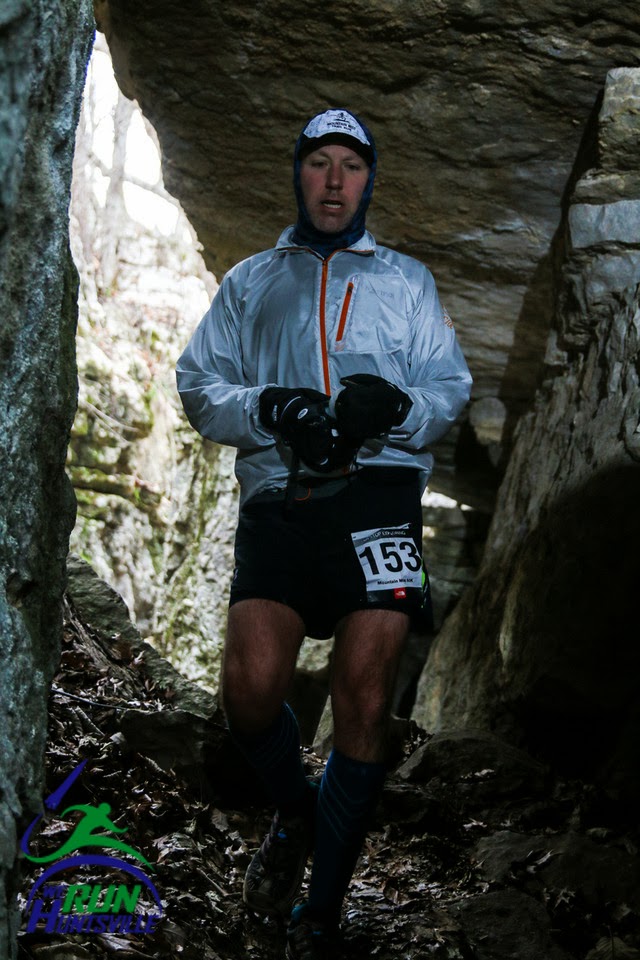 Going down Mtn Mist I feel giddy and decide to push it and leave the lovely ladies. I finally catch Rick Maehlmann's balmy white legs and try to stay with him as long a possible. I felt so good that I was running the inclines, in essence just going for it. Down Warpath, through power-line and quick stepping/hiking K2. Goat trail was no problem. On the inclines I bent my legs a little and kept running. Coming to 3 benches I see Keith and Chia Chi who holler and cheer so loud for me that it was almost embarrassing. I mean they were screaming and Keith was rubbing his mipples...I just ignored them and kept pressing on. While thinking about their excessive display of love toward me I catch a toe and BOOOM! Knee on the rocks, water bottle top flew off and all my water on the ground. That fall had an impact on me. I knew with it being in the 20's I would be ok without water until mile 17. 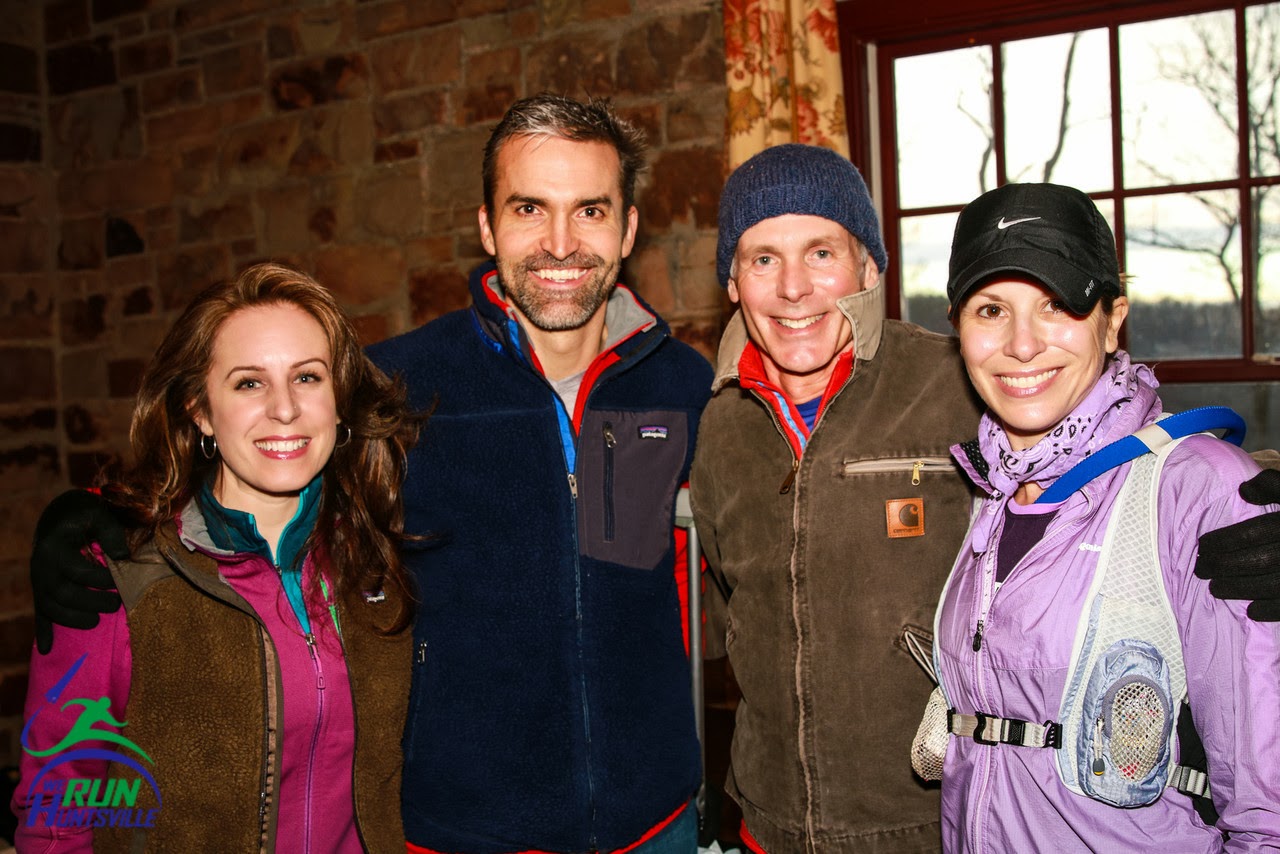 Around to Logan and through stone cuts where Gregg and Karen were tongue kissing and taking pictures of it. I asked if I could join (what happens in the stone cuts, stays in the stone cuts). Coming down Sinks there is this lady from Pennsylvania running with me. She didn't look like she was from Pennsylvania, cause she didn't have the beard and bowl cut. Guess she's a contemporary. Anyway, while running I can hear her coming around to pass me when all of a sudden I heard that sound....you know that sound, that sound that makes demon's tremble...thats right, the sound of a toe catching a root. BOOOOM! I look back and her whole body was extended sliding like superwoman. She hit so hard her mammry's poked out her back. I did what any man would do...asked her if she was alright while I kept running.

Made it to 17 fine wondering if I had enough in me for the back 14. I hit High Trail and find Jason Shattuck, to which I am being very quite until I can pass his big-lipped redneck butt. All of a sudden I smell something and hear this manly voice saying, "You better get outta my way!" I look back and its friggin Christy. Believe it our not, I was happy. I knew I was slowing down, and I new she was gonna PR. She left me and Jason like it was nothing. 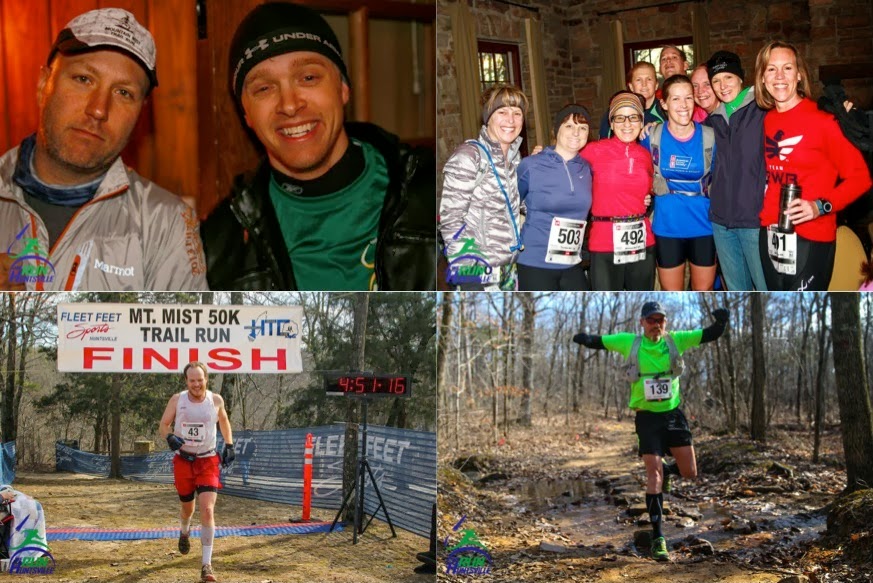 Bluffline and Railroad bed are the parts I normally fly on. Not today, my gas was running out (not that gas even though I did crop dust some people). I made it to Railroad bed and was greeted by the Collin's, and the Giles'. I was breaking, and then I found out that Robyn had bought me a Mtn Dew and had it waiting like she did last year. WOW! I love those Yankees.

While at the Railroad Bed aid station this dude in a German accent (not Martin), yelled at one of the ladies to open his candy bar faster. I think he was joking but I bough got pissed off. This dude was wearing moulott's or his grandmas stretched out panty hose. As we started running he stumped his toe and hollered some obscenities. To be honest...I laughed.

I make it to Waterline and have not looked at the time once. I do my best to run as much of Waterline as possible. The ice waterfall was gorgeous, and the climb past it sucked. I get to the mile 24 aid station and am greeted by my buddy Megan who gets me the Coke that super-awesome Anna Edmiston got for me. This is where it happened. Daniel Carter asks me if I still plan to do 5:30, to which I reply yes. Now remember, I had no clue the time. He said, "well you have 50 minutes to get there".....EMOTIONAL CRASH! I knew that I could  not do the 6 miles and two climbs in 50 minutes. Could I have made 5:49 like I did last year? Probably, however I was so focused on the 5:30 that I pretty much gave up. The last 6 miles was devastating. People were passing me over and over. I was "that guy" that has to step aside and let the little old grannies in ATS's pass by (all-terrain-scooters). 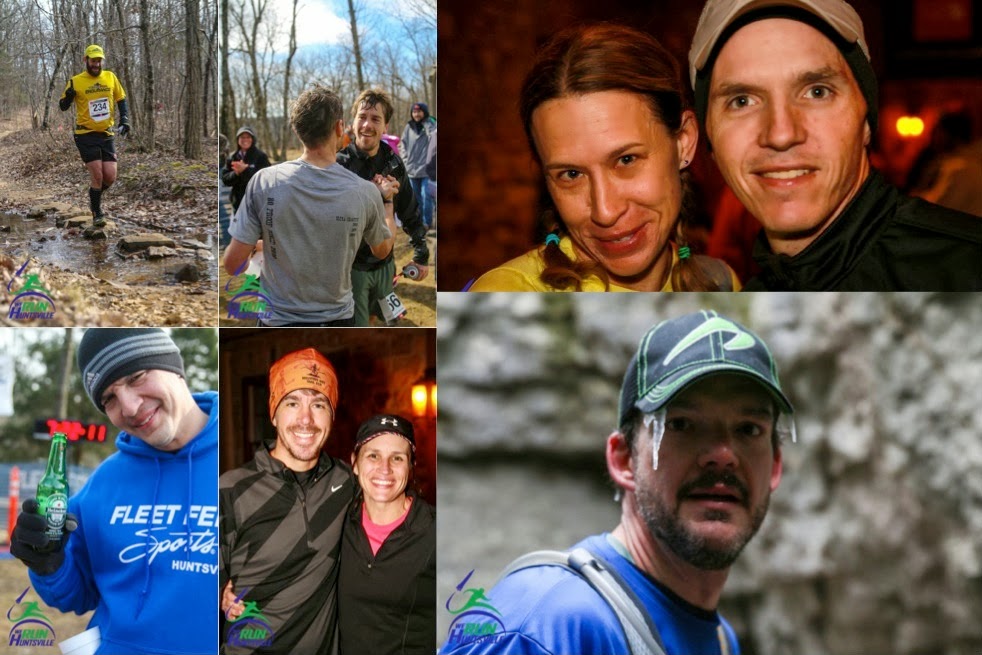 I looked at Death Trail thought about the option to quit there. How sick is that? Within 3 miles of the finish and have a thought to bail out. I pressed on as smiling people like Kris Strope, Dave, and Kyle pass me. I make it to the top of rest shelter and am greeted by a great group of folk like Drew Williams and Josh Kennedy...except I was a whiny buttwipe.

With a mile to go I hear coming from behind saying..."Oh, this is gonna hurt." It was Jason Shattuck as he passed me. Made it to the finish with a good time, however, I felt defeated and disappointed. I didn't even make my time from 2 yrs ago.

People have said repeatedly, "Well you finished...at least you didn't give up..." Truth is, I did give up. I gave up 6 miles earlier.

Don't ever give up. I learned some valuable 100 miler lessons that day. 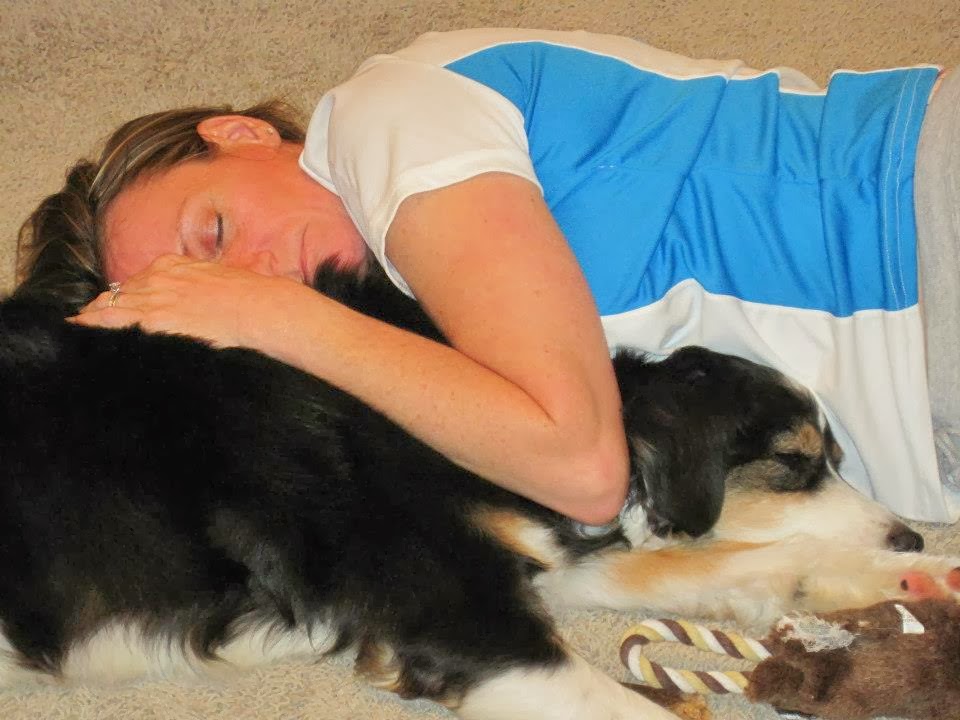 This race report is dedicated to the Giles family. While working the aid station and serving me Mtn Dew, their beloved dog Socrates passed from a bout with Cancer. I truly appreciate all they do in the running community.

I love my running community!

UPDATE: I love Keith and Chia Chi...I'm honored they even remember my name. 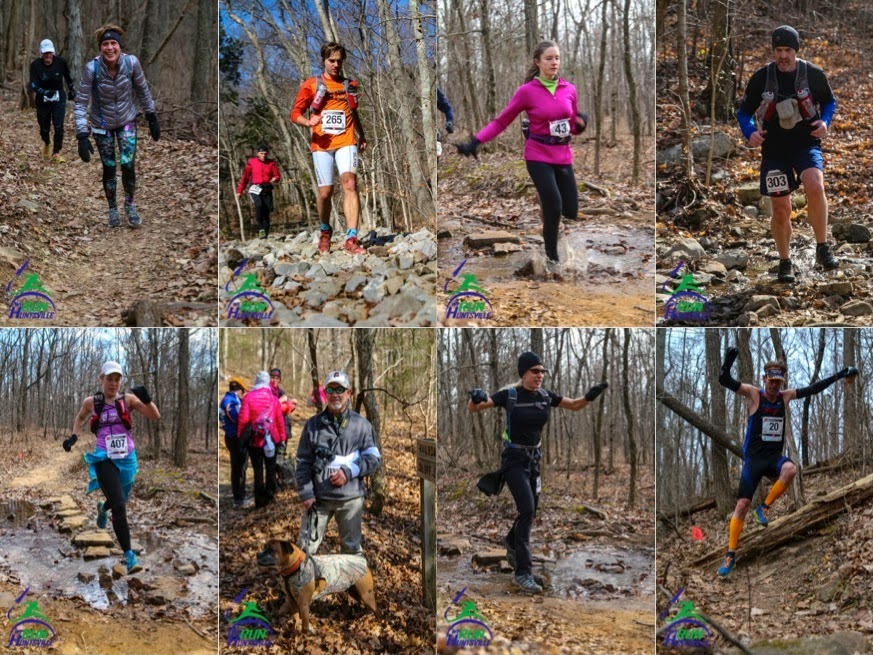 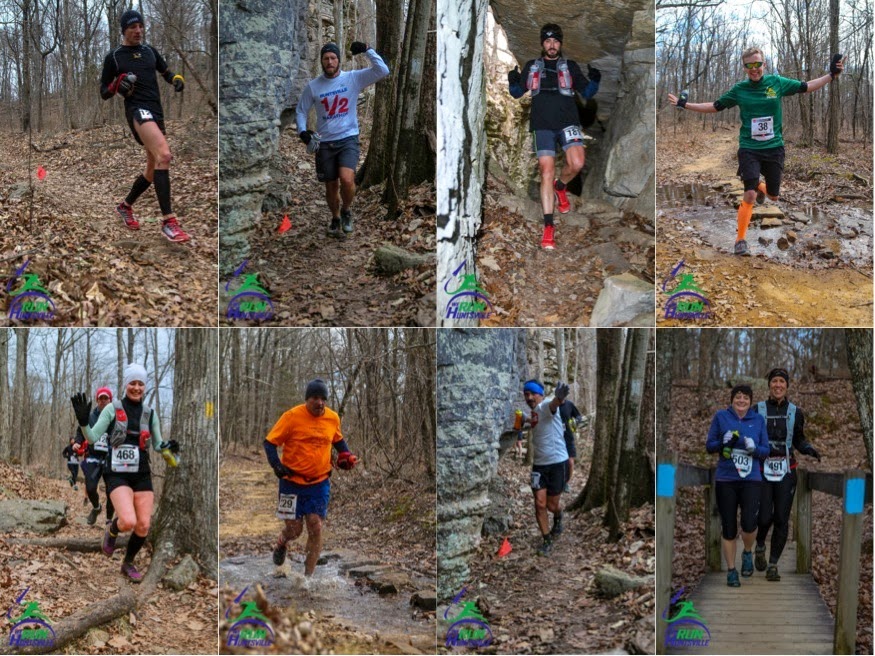 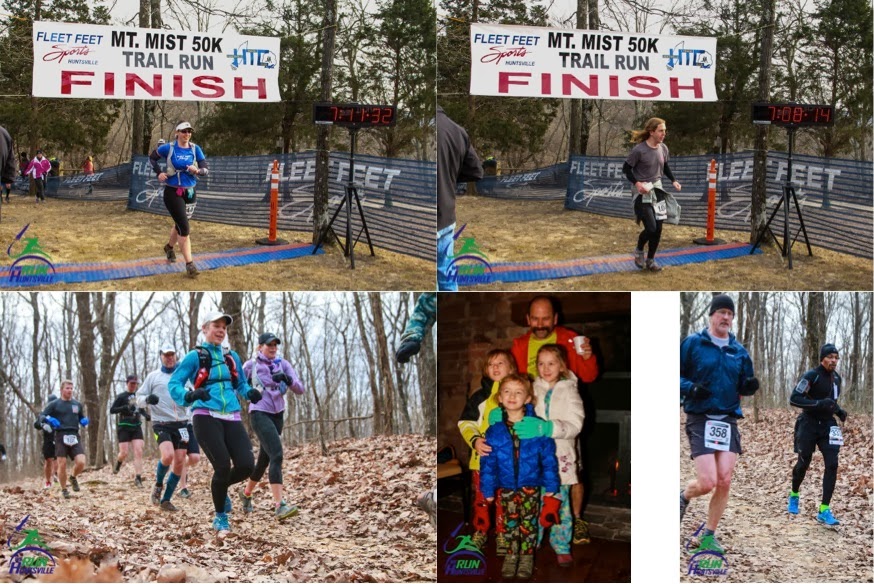 Posted by HotWingRunner at 6:33 PM