Oak Barrel 2014 played out much different than 2013. Last year, everyone knows I had to use my
McKay Hollow shirt to clean brownie puddin off my bum. In case you were wondering, I went back after this years race to see if I could find the shirt....no luck. The goal for this year was that I had no goal. I wanted to do good, however, in prepping for the 100 miler, it was not important to crush this race.

I decided to start between a 7:45 and 8:00 minute pace to the hill and just hope for the best going up. On our way to Whiskey Hill our nostrils are treated with the refreshing scent of fresh poo from a family of inbred cows. I reach Whiskey Hill, which according to my Suunto Ambiet (the best GPS watch on the market) is around 2 miles long. As usual I mouthed off to a couple people trying to provoke them to race me up. One chic tried but I put the smack down on her. Actually I was chasing Rachel Eidson. For the first time ever I ran the entire hill. 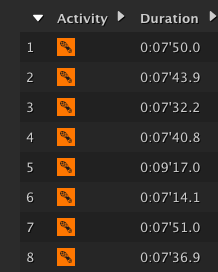 I peak the top around mile 5 and understand that for the next 3.4 miles I will be on rolling hills. I despise rolling hills. Not only rolling hill, the wind was very strong. In the distance I could see Rachel and a lady that looked like Christy. I knew it wasn't Christy cause this lady was tone, tan and fast. So I used them as bait to just push the downhill sections and try to maintain on the uphill. So up until this point my mile splits were as seen on the chart. I slowly began to gain ground on Rachel and Misty (the girl that looked like Christy). Around mile 8.4 the long down hill begins. So I lean forward staying perpendicular to the ground and begin to push. The distance between Rachel and Misty began to shorten. I was so determined, however, worried because I knew what happened at mile 11 last year. I was having a great race and was praying that my stomach would hold out. All of a sudden around mile 9 things began to change. I was gaining on Rachel and Misty and had been passing all the people who started out way to fast, just they way I had done so many times before. Around mile 10 I was shocked. Misty was Christy. Listen, unlike times past, I am not bragging here. You see Christy had been sick all week and she was running strong. If she had been healthy I never would have caught her, however, she was not the target...It was that Pure Barr Speedster Rachel who smoked me last year. I could feel the adrenaline pumping and I calculated that I could PR even while on this course. I finally catch Rachel and we run together just as two years ago. We come to mile 11 and reminisce while I point to the location I pulled off last year to change my oil. We start reeling people in as our pace quickens. Around the corner we are on the main road to the finish.  I honestly have never felt so amazing at the end of a half marathon as I did that day. So I went all out. 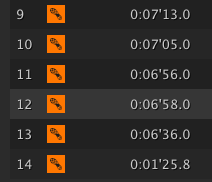 When I got home I was shocked at what I saw for miles 9-13.1. I had dropped the last full mile to a 6:36. I crossed the finish line and heard the announcer say..."This is Cary Long from Huntsville. He wants to change his name to Who Farted". WHAT THE CRAP? Who told him to say that? I know during registration you can tell them something about yourself, however, I don't remember putting anything.

Anyway, Rachel came in a couple of seconds after me and Christy was a few more after that. If you don't have anyone to challenge you...find someone. You win some and you lose some, however, iron sharpens iron. My friends are iron!

I had another surprise as we went to look at the results posted. I had placed first in my age group out of 87 runners. Not only that, I was 37th out of 1177 finishers. To date, that is my highest finish of the ratio of place to runners. Very happy day. Our Huntsville community celebrated many 1st, 2nd and 3rd place finishes resulting in a whole bunch of wood. Rachel finished 1st in her age group and Christy finished 3rd in the old ladies group (masters), which was weird they did that cause she would have been 1st in her age group.

The picnic was awesome. I love our running community. Was so glad my wife and son came out. Lastly, I got to meet the White Whipers wife, Mrs, Christy Deaton.

Posted by HotWingRunner at 4:05 PM