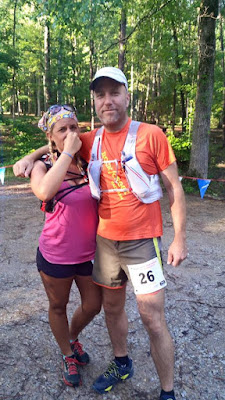 When you are in the upper echelon of the lower half of the middle of the pack runners, it is easy to get cocky about your mad running skills. So signing up to the Hotter N Hell 18 Miler I knew it would be hot and I knew it would be a lot of climb, but it is still only 18 miles. I show up in my Rock/Creek Race Team Kit and I can see all the topless fast runners sizing me up. They see the outfit and automatically think I must be fast, only to realize I'm the mascot. So I play the part, make my boobs jiggle a little and stand like Nacho Libre so they can check out my quads and hammies.

David Tosch still hasn't gotten a hair cut and is about 2 inches and trip to Sally Beauty supply from looking like Caitlin Jenner's sister. All of a sudden people start running...evidently someone said go. Right out of the gate this "Ginger" starts talking and in the first 50 yards I know he's from Tuscon on a business trip to Biloxi, and drove there from 3:00 that morning, is not used to running in the humidity, ran a couple days in Biloxi to "acclimate", etc... I quickly accelerated and he wishes me luck. On into the trail I here someone talking behind me and it is Terry Tucson. He begins to tell the guys that he took a caffeine pill and apologizes for being a "chatterbox" but whenever he takes one he can't stop talking. He was right. I heard him talking for a few miles.

The first 3 miles aren't that bad, then around 4-5 we start climbing. To this point it was hot and very humid. I ran most of the inclines and didn't push the flats while sucking down tailwind the whole time. On the ascent to the aid station, there was this dude and chic. We were going back and forth and left the aid station together. Leaving the aid station we start talking about food mistakes and I mention hot wings and how I have a blog called Hotwingrunner. Immediately he told me he reads my blogs and even has it set in his feed. Of course I was smiling...Didn't seem to impress the chic...I'm just assuming she didn't know English or something. I ask him his name and he says... "Greg....Greg Dill." So sometimes things pop in my mind and in a split second I must decide whether to speak or keep silent. Well I spoke. "So Dill huh? Kinda like Dillhole?" Pretty sure the hot chic who didn't know English laughed at that. Told him he was going in the race report. Shortly after that one of the runners Terry Tuscon was talking to caught me and asked me if I was ok...Guess I was breathing hard. He then asked me if I was the guy who wrote race reports...I hugged him. (Thanks Mr. Jemison) 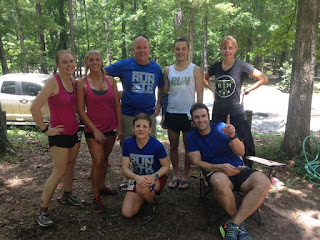 We descend towards Peavine Falls. It is pretty treacherous, therefore there is a rope to help people down. At the bottom, a quick hat dip and we start the suck climb. Its a steep climb with a short descent then another large steep climb to the top. It reminded me of why I only ran one loop last year then quit. However, I am in Pinhoti training and had to purge those thoughts. Up to the top with a long downhill section for approximately 2 miles back to the start/finish area. I feel pretty good, fill up with Tailwind and go back out for a second loop.

As I start the second loop about a .25 mile in there is no one in front or back of me. I feel like I am going the wrong way even though there are flags. I round a corner and all of a sudden SNAKE! In trying to quickly ascertain what kind it is I see a tail, body, head, body, and tail...What the crap? It was a black snake trying to eat what I think was a cottonmouth. I could not believe what I was seeing.  So I blessed the snakes food and took off. Well not really, just shuffled cause I was tired and extremely hot. All of the inclines I ran on the first loop, I was walking on the second. For a few miles I saw no one. Eventually, I see the topless white guy who I heard speaking spanish, wearing a Salomon hydration pack walking. I holler at him to go. He looks back and I say it again.."Go, start running!" So he did. Turns out this was his first race and longest run ever. I caught him and told him just to follow me and do what I do. We'll call him Johnny Mexico, since his name is Johnny and he grew up with missionaries in Mexico. Johnny runs when I run, walks when I walks, then he farts on me! Thats not how this is supposed to work. I'm the only one who does the farting! It's my thing! We make it to Peavine Falls where some kids were playing in it. I know they Pizzed all in it but I didn't care, I wanted to get wet. Told Johnny, it will pay off. Sure enough we began the tough climbs and it was steamy and hot. You know that feeling where you hope a rock falls on you and crushes your leg so that they have to send a helicopter out to get you. It was that kind of heat and climb.

Johnny and I make it to the top and we begin the descent. Coming towards the finish I see my bro Will Barnwell and he yells his pet name for me. This dude with a mullet pulled back in a pony-tail begins to catch us and Johnny says "Lets Go". Finished with an impressive kick at the end only to discover my overall time 4:yousuck12. It took me 4 hours and 12 minutes to run 18 miles!

I find out Brandon Mader won, and Megan didn't beat me!

Did you think you could get through one of my reports without a poop story?

So after the race we truck it to Smith Lake in Cullman for a redneck family outing on pontoon boat equivalent of Clark Griswold's station wagon. We lowered some anchors and just sat out in the water enjoying the day. All of a sudden I look on the back about 50 feet away and this chic his hunched down with a float trying to cover herself as she is unleashed a pound of H$LL's furry. Her face is squinched so bad she looked Asian. I knew that look and I knew she was having contractions. All of a sudden she lowers her head on her hand and was in full delivery. She couldn't see me looking cause I had sunglasses on. She was hurting so bad I thought she had started crying. 10 minutes later (no exaggeration) she gets off the bank and back into the water. I knew I shouldn't have, but I looked at the spot she had just left. I am at least 50 feet away. I promise...I saw why she looked like she was in so much pain. It looked like Sasquatch evidence. Whats even funnier is I knew the chic.

All jokes aside...I am so grateful to be able to do these races. I love the friends that I make and the challenges we endure together. Grateful to my God for His amazing creations. My wife had Pig-Tails yesterday that would rival Megan and Pig-Tail Penny's. 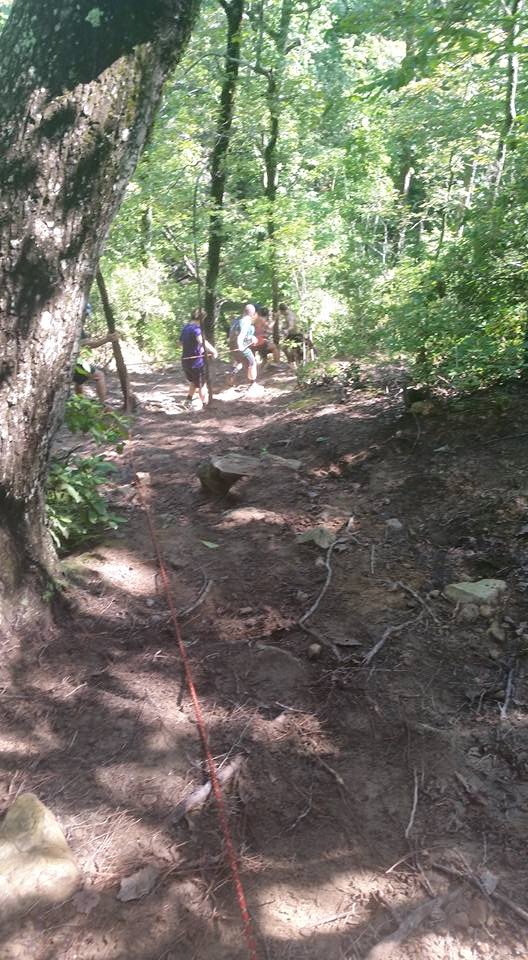 Posted by HotWingRunner at 2:31 PM