6 am, a trumpet sounds. 1 hour till race start. Squat on the ground, jiggle my stomach and command those foul demon turds to come forth. Nothing. Ten hours earlier at the Windrock Offroad Vehicle Park we are surround by Tennessee's finest hillbilly's with 400 four-wheelers and other offroad vehicles. All night long four wheelers come cruising by the tents, one playing gangsta rap. Rob Youngren takes his pillow, wraps around his head securing it with a belt. Dewayne Satterfield ops to sleep outside on the ground for fear of him or Jeff Deaton accidentally ending up in the pole-hole position in Jeff's tent. I lay in the back of my jeep sleeping about as good as Kanye West at a skinhead slumber party.

Through the famous Frozen Head State Park gate we eventually enter the single track trail and begin to walk up the biggest climb I have ever seen. Switchbacks galore. One lady in front causing a train but its ok, we are hiking fine. We reach the top and begin a completely runnable descent, except our train conductor is not very confident going down. Twenty people follow her unable to pass. I get frustrated and holler out, "Lets go up front...This train needs to move." Two people pass, about a 10th to go till the bottom, we are able to pass.

In front of David Thurman and myself is a young couple running. I will leave out some details so you will not figure who he is. Up ahead everyone comes to a stand still trying to traverse a big downed tree. I veer right trying to find an alternate route but fail, and tell him and his girl to go ahead, that I thought I could find a better way. For this blog we will refer to him as "The Kid". After I tell them to go ahead The Kid says to me "Is this your first ultra?" It wasn't a question, It was a statement. David said, "I think that was sarcasm." I replied, "Well if its sarcasm then yeah I get it, I should have just stayed the path. If it is a question, then yes I have run a few."

Me..."Is this your first ultra?" The Kid..."She and I have three buckles each under our belts." Me..."Wow, which ones?" He made some smart comment to which I replied, "Well I didn't know they gave out buckles at Tough Mudders." BOOM! I look at David and said, "Now that is Funny!" He said I did do the Tough Mudder championship, so if you want to talk about my obstacle racing. I asked again, which 100's did you run, just trying to have conversation. The Kid..."You didn't answer my question, Is this your first ultra?" Me..."Well no, I've ran, blah, blah blah,...and about to get my second buckle." He finally tells me what he's ran, and I feel like the conversation is cool at this point. A little while later on David and I start talking about David Riddle. So I ask The Kid, "Do you know David Riddle? He lives where you do." The Kid..."No, has he won anything?" Me..."Yeah, he sets course records everywhere he goes...(The Kid cuts me off) "Well has he one Western States?" Me..."Well he took..." (he cuts me off again.) "Has we won, blah blah blah..." Me..."No, but he..." The Kid..."Well then he hasn't won everything has he!?! Is he Rob Krar? I don't think so. So he hasn't won everything."  I was speechless, didn't really know how to respond cause this guy wasn't being funny. I paused for a second fearing if I kept going we were going to end up in a fight...Me..."Well I guess you are right, he sucks." He replies with nothing. I turn and look at David and David just shakes his head. I'm getting madder and madder.

We push up more climbs and descents. We meet up with Roy Tamez, Malin Timbs, and a few more cool "Adult" runners. We laugh about how Roy's wife has the hots for me and about the time we were on the prison bus at the Thunder Rock training talking about who we would eat in a survival situation. Of course Roy looks Hawaiian, So I said I would eat him first cause he would taste like Hawaiian food. This chic speaks up and says, "Well I'm German." Stupid me says, "I love sausage." The group explodes into laughter. Made it worse by saying bratwurst. Malin speaks up ands says, "I'm Swedish." I thought it best to shut up right then!

Past Aid Station 2 around Deja Vu eventually coming to Testicle Spectacle. We descend at about a 45 minute per mile pace. SERIOUSLY!

David and I are in complete shock at what is ahead of us. Go down a homemade trail on a powerline cut full of briar's, turn around at some point and come back up the same. It was so steep that for much of it we would have to descend on our butts. We reach the turn around and the volunteers punching our bids state we are halfway. Halfway? One guys watch showed 18 miles, while anouthers show 20 just pass the turn around point. Either way, both add up to more than a 50K. The climb out was nothing like I had ever experienced. I would soon find out it would be the easier than what was coming. On the way up we hear a whistle blowing. I realized that wasn't a good thing. A runner had passed out on the climb. They found him taking a dirt nap for real! As he came to I heard him say, "I was having the best dream ever."

We reach the top and immediately go down the other side of the powerline cut called something wil the word Meth in it. Another slow descent, direct sunlight, heat radiating, and a 6 foot black snake cuts in front of me. We find our way to the bottom treking toward the Brushy Mountain State Penitentiary. David and I are spent, dreaming about swimming and an Ice cold Coke. Out of water I begin to get worried. Finally we reach the prison and we see aid. I asked what were the chances of getting an Ice COLD COKE. The guy shook his head no. Another asked me what it would be worth to me. I replied, "I can squeel like a Pig." He opened up a cooler and there it was! I gave thanks to him and the Lord and David and I partook. Didn't even wipe off the top after he drank from it.

Through the prison, into solitary confinement, no lights anywhere, to find a dude standing in the dark hole ready to punch my bib. This is where we discovered a real HELL in Tennessee. Rat Jaw. Not only Rat Jaw, but UBER RAT JAW. Supposedly this is a one mile up hill. Before coming I thought it would be no big deal. Dewayne and Rob laughed. As with Testicle Spectacle, much of the climbing you have to use both hands, grasping for briar's to help you get up. 1/4 mile in people are lining the trail taking a break. Dudes with their heads literally  between there legs. Women cussing. Everyone looking for a trail and following whoever seems to know what they are doing. The blind leading the blind. The only thing we know to do is go up and stay in line with the cut. For around an hour to an hour and a half, you are looking directly into someones crack waiting for their brown eye to pop out and wink at you. Our combined body odors mixing in the stale air following us all the way up. IT NEVER ENDS!

Until you run this race, you cannot ever understand or appreciate what it takes to make it to the top. Finally we reach the Fire Tower, only to realize we must now climb it to get our bib punched. YOU ARE FREAKIN KIDDING ME! By this point I had already made up in my mind that at Laz's aid station I would drop and hit the road to the .7 mile finish termed the "Marathon" (which was more like 30 miles). I told the lady I wasn't gonna continue. I ate my rice cake PB&J. David Dye comes up and I tell him I am going to drop to the Marathon. He won't let me. Laz overhears and tells me no, that I have plenty of time. I almost start crying, because everyone is talking about how bad the 4 mile climb after the aid station is. David seriously put my pack on me, gets my headlamp and makes me go out for the 9 mile finish.

Chimney tops at the beginning of the race would be bad...but at 30 miles? Roy, Malin and I went back and forth on the climbs. Eventually, we begin to descend and I asked if we had reached the top. Nope, the real climb had not even began. When it did, I found myself for the first time in the race taking breaks. Head between my legs I pondered why I signed up for the Georgia Death Race, and figured I may back out of it. Finally making it to the top for a ridge run. Malin has gotten out of my sight, and I run the best I can, which was probably a 14 minute pace.

The drop finally begins and I reach my buddy Jeff Deaton's aid station. He tells me I have about 3.3 miles to go and it is all down hill. Something rose up in me. I took off and I ran faster than I have at any point in the race. I was running so fast that I caught and passed others people running. After the interaction with the Punk I had to goals. 1. To beat the sun. 2. To beat The Kid. I may have farted on Malin when I passed her. Passed the cool chic Gina, and several dudes. I catch my friend Dewayne Satterfield and I am in disbelief. When I get to him I ask if he is ok. He stated he had puked a few times, and even laid down for 45 minutes. I told him I was gonna run in and he yelled "No! I don't want you to run with me. You have a chance at beating 12 hours." I hated leaving him. But I ran. Back through Laz's aid station, Laz holds his hand out giving me a high five. I hit the road and give it everything.

Advice to future runners of this race
1. Carry a bladder.
2. Fill up at EVERY AID STATION
3. Keep moving forward, you will reach the top.
4. Throw away your skanky smelling shorts! Cause we will smell them all the way up.
5. Don't lay in the grass at the end. I am eat up with chiggers. 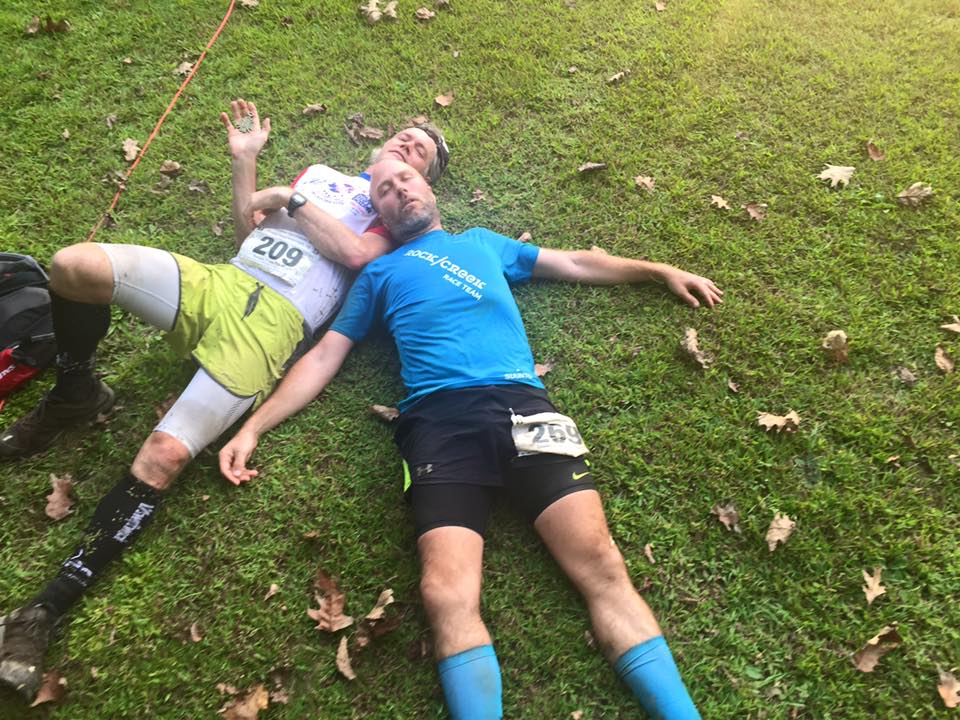 Posted by HotWingRunner at 2:37 PM