Stump Jump 2011 was a race never to forget. It was the race where I received my first leg cramp, and contemplated ending my ultra-running career, so much so that I did not sign up for Mtn. Mist until a day later. SJ 2011 ended with a 7:47 finish.

Fast forward to Oct 6, 2012. Pull into the parking lot and inhale the scent of pain, joy and 15 porta potties. The race begins with myself, Christy Scott, Martin Schneekloth, and Megan Nobriga. Christy quickly accelerates leaving myself and Martin. I look behind me and I see Megan drifting back with a look of uncertainty yet determined. We enter the single-track and the helicopter hover's over us and trees, branches, leaves and spit are flying everywhere due to the rotor wash. Around the first aid station Kris Whorton yells at me and I'm pretty sure she said, "Hey Cary, you were voted Rock Creek's sexiest trail runner." I thought thats what she said but I was running so fast I could be mistaken.
Well, she at least hollered out my name. Before reaching Mushroom rock we had caught up with Christy and my plan was to stay with her as long as possible. When Christy walked, I walked. When  Christy ran, I ran. When Christy flatulated....well you get the idea. Descending past Mushroom rock was enchanting. Fog, single-track & switchbacks oh my. At mile 5.33 I caught my biggest challenger of every race...SARAH TIERNEY. The problem is that every time I catch her early on, she catches me around the halfway point and ends up beating me. The sun peaked out for a short time then hid again behind the clouds...then the temperature began to drop. This was actually what I had prayed for. Cool running weather. We hit rock garden. Even though I have my La Sportiva's on I was still careful. All of a sudden my foot slipped down between 2 rocks in a crack just big enough for my foot. As I was going down I was also falling to the side. Right before my leg would have snapped from the force I caught the top of the rock and said, "THANK YOU JESUS!". Whew, I avoided a disaster. The funniest line of the day came from Martin..."Is this the rock Garden?" I replied, "If it ain't, i'm quittin at the next aid station." We finally made it to the 19 mile aid station and Christy and Martin left me. This is the point last year when I began to break down. 2012 was no different. I could feel myself slowing...however the words of Timothy Pitt kept ringing in my ears, "run harder when you hit the wall you fat pansy" So I did. Surprisingly I was able to trek up from Suck Creek fairly well. 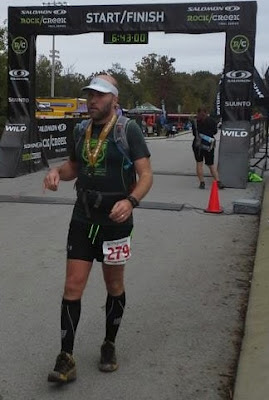 At this point I am looking back for SARAH TIERNEY. Beth Barry, another Huntsville honker catches me and we make it to Mushroom rock together. Ok, you ever been in one of them races where you hear the crowd, the announcer and think, "Woohoo, I'm almost there...." Well SJ is like that except you still have 4 friggin miles to go. At one point around 3 miles out you can even see runners coming around to the finish line. So I'm ok that Beth left me but I could not believe it when "Air Moses" dude passed me. I had on about $250 worth of gear clothing my body and Flea Market Phil passes me in toe thongs. (no offense to flea market phil) I started to say something but I was afraid he would grab me by the throat with those sausage finger toes and choke me out...so I kept my mouth shut. In all seriousness, it's usually the last 6 miles of an ultra where I question my commitment to every subsequent race that I have signed up for. SJ 2012 was no exception. I contemplated telling Kris Whorton that I was dropping from Lookout Mtn 50 miler. I crossed a road section and a volunteer stated "1.7 miles to the finish." I looked at my watch and it said 6:24. My goal was to beat my previous years time by 1 hour. I had 23 minutes to run 1.7 miles....So I remembered Timmie's words again and I started talking to myself out loud. "Come on you sissy! You gotta run. Come on push it. That's not a hill run through it. Your not gonna cry! But I may...No your not!" I break through the woods onto the street for the last half mile. I ain't gonna lie. This part sucks until you make the turn to the finish. I did it, 6:42. On a muddy, rainy, and cold day when Stump Jump officials stated that participants times were around 45 minutes slower this year...I took off 1 hr. and 5 minutes from 2011. I also have no clue why my pinky is sticking out the way it is in this picture. My toes were numb, and I could not feel my fingertips. I was sad to hear that my buddy Sarah had to drop due to getting stung by a yellow jacket. Yeah I wanted to beat her but not that way. Christy turned in a 6:17 and Martin a 6:30. I was very proud of my first time 50K friend Megan...she finished with a 7:24 on a hard 50K.

At the finish line we kept looking for Christy's husband, you see he was going to run the 11 mile trail after everyone started and was going to take our pictures at the finish. Tony was nowhere to be found 8 hrs after the start of the race. Turns out Tony decided to take his longest trail run of 15 miles smash it by running the 50K course. I could not believe it. Congrats to Aaron Penton and Casey Baird for forgetting about the time change and starting the 11 miler 40 minutes late. Also to my wife Janice and friends Camille and Hollie for completing the 11 miler. The three are hating me cause the trail whooped their butts. Oh yeah, where the crap did Blake Thompson come from????

The picture to the left is some of the carnage of the day. Hey, Kankles are the new sexy!
Posted by HotWingRunner at 12:41 PM